What is DMT the Spirit Molecule?

DMT, chemically known as N, N, Dimethyltryptamine is a naturally-occurring serotonergic psychedelic substance capable of producing experiences that, in intensity, surpass those associated with standard doses of most orally administered psychedelics and indeed most other categories of psychoactive drugs.

The subjective effects of DMT have a rapid onset and are characterized by unusually vivid visual imagery and somatic effects, which arise within seconds of the injection. At high doses, the experience rapidly progresses into a deep and profound immersion – sometimes described as a ‘breakthrough’. This experience is often characterized by a sense of entering into an entirely ‘other’ but no less ‘real’ world or dimension.

DMT was first synthesized by a Canadian chemist, Richard Manske in 1931, but was at the time not assessed for human pharmacological effects. In 1946, the microbiologist Oswaldo Gonçalves de Lima discovered DMT’s natural occurrence in plants. DMT’s hallucinogenic properties were not discovered until 1956 when Stephen Szara, a pioneering Hungarian chemist and psychiatrist, extracted DMT from the Mimosa hostilis plant and administered the extract to himself intramuscularly (Szára, 1956). This sequence of events formed the link between modern science and the historical use of many DMT-containing plants as a cultural and religious ritual sacrament.

The discovery of a number of hallucinogens in the 1950’s and observations of their effects on perception, effect and behavior prompted hypotheses that the syndrome known as schizophrenia might be caused by an error in metabolism that produced such hallucinogens in the human brain, forming a schizo- or psycho-toxin. The presence of endogenous hallucinogenic compounds, related mainly to those resembling dopamine (mescaline) or serotonin (DMT), were subsequently sought.

Although several interesting new compounds were found, the only known hallucinogens isolated were those derived from tryptophan (DMT, and 5-methoxy-DMT). Data were subsequently developed illustrating pathways for their endogenous synthesis in mammalian species, including humans. Over 60 studies were eventually undertaken in an attempt to correlate the presence or concentration of these compounds in blood and/or urine with a particular psychiatric diagnosis.

However, there is yet to be any clear-cut or repeatable correlation of the presence or level of DMT in peripheral body fluids with any psychiatric diagnosis. Nonetheless, the discovery of endogenous hallucinogens and the possibilities rendered in various hypotheses surrounding their role and function in mental illness, normal and “extraordinary” brain function spurred further research into the mechanisms for their biosynthesis, metabolism and mode of action as well as for their known and profound effects on consciousness.

Is it the same thing as ayahuasca?

Yes, DMT is the main active ingredient in ayahuasca. Ayahuasca is traditionally prepared using two plants called Banisteriopsis caapi and Psychotria viridis. The latter contains DMT while the former contains MAOIs, which prevent certain enzymes in your body from breaking down DMT.

Is DMT legal in the US?

DMT is a Schedule I controlled substance in the United States, which means it’s illegal to make, buy, possess, or distribute it. Some cities have recently decriminalized it, but it’s still illegal under state and federal law. Despite its illegal status, DMT is used in some religious ceremonies and various settings for an “awakening” or to obtain deep spiritual insight.

DMT has a high potential for abuse. DMT stimulates the production of serotonin, a neurotransmitter that causes feelings of happiness. DMT causes users to experience intense euphoria, hallucinations, and new perceptions of reality which people often characterize as life-changing. A DMT trip can begin instantly and generally lasts less than an hour when users smoke the drug. Users who drink DMT as a brew often begin to experience hallucinations that last for four to six hours after about thirty minutes. Some users report mild lingering effects that last for several days.

DMT has no approved medical use in the United States. But can be used by researchers under a Schedule I research registration that requires approval from both the Drug Enforcement Administration (DEA) and the Food and Drug Administration (FDA).

Studies indicate that DMT works by partially blocking the discriminative stimulus effects of phencyclidine, which produces hallucinations through its actions at NMDA receptors. In addition, activation of sigma-1 receptor by DMT may lead to potentiation of NMDA receptors according to research.

What are the possible side effects of DMT?

Although many users promote the “benefits” of DMT, the drug is not safe according to Addiction Centers. In fact, DMT can substantially harm a person’s physical health and mental wellbeing. Since DMT causes the brain to release serotonin, high doses of the drug may send the body into a serotonin overdose. This condition might provoke seizures, obstruct breathing, and induce a coma. DMT can cause a person to die or greatly suffer.

While some DMT users have had positive psychological experiences with the drug, others have suffered DMT trips which they describe as confusing and terrifying. In fact, the psychological effects of DMT can be traumatizing, especially for people who are living with mental illness, especially schizophrenia.

Unlike most hallucinogens, there is little evidence that DMT causes tolerance or any physical withdrawal symptoms. For this reason, researchers generally do not believe that DMT is addictive. Furthermore, there is no evidence that using DMT on a long-term basis significantly changes or damages a person’s brain.

However, DMT can cause psychological dependence when a person repeatedly uses it to escape reality. Some DMT users even consider the drug to be a source of therapy and take it regularly to feel better. When people use DMT in this way, they may eventually feel unable to stop using DMT and other hallucinogens. The limited studies on the topic of DMT dependence suggest that DMT users can develop cravings for the drug and experience psychological distress when they cannot use it. Someone who develops a DMT habit is more likely to suffer its effects on their health. Behaviors which indicate DMT dependence include taking higher and more frequent doses of the drug, gathering supplies of it, and spend more money on it.

Using DMT with other hallucinogens like LSD or magic mushrooms can make an already strong trip even more intense. Taking DMT with stimulants like amphetamines or cocaine may heighten DMT-related feelings of fear or anxiety.

In addition, DMT shouldn’t be taken with opioids, especially tramadol, because of an increased risk of seizure. Using DMT while taking antidepressants, especially monoamine oxidase inhibitors (MAOIs), can result in a serious condition called serotonin syndrome. 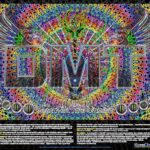