The Polk County Sheriff’s office says it is investigating the death of a 32-year-old woman believed to have overdosed on Fentanyl. According to news report, deputies responded to a report of a possible death along Highway 102 near Fertile, MN. Katie Flick of Erskine, MN was declared deceased on the scene. Her remains were later taken to UND Pathology for an autopsy.

Upon further investigation, it was suspected Flick died of a Fentanyl overdose. George Piatkoff, 29, of Erskine MN was with Flick on Highway 102. He was taken to Riverview Hospital after police arrived.

Piatkoff was later arrested along with 43-year-old Laschon Metcalf of Crookston. Both are currently facing pending charges.

Authorities say about 16 M30 pills, which are considered to be fake Percocet, were recovered. It is suspected these pills were laced with Fentanyl.

Fentanyl is a powerful synthetic opioid that is similar to morphine but is 50 to 100 times more potent. It is a prescription drug that is also made and used illegally.

The Polk County Sheriff’s Office states M30 pills have been flooding the region and are extremely deadly. Deputies say these pills have been accounted for as the source of multiple overdoses. The illegally used fentanyl most often associated with recent overdoses is made in labs. This synthetic fentanyl is sold illegally as a powder, dropped onto blotter paper, put in eye droppers and nasal sprays, or made into pills that look like other prescription opioids. 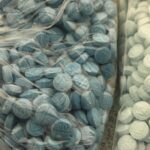