Is ClearLax and Miralax the same thing?

ClearLax and Miralax are brands of polyethylene glycol 3350, a laxative used to treat occasional constipation and irritable bowel syndrome (IBS). While MiraLax is manufactured by Bayer, and approved by the U.S. Food & Drug Administration (FDA) in February 1999. ClearLax is manufactured by several leading companies including Amazon, Walgreens, Equate, Good sense, and many others.

Do ClearLax and Miralax work the same way?

Both ClearLax and Miralax contain the same active ingredient: polyethylene glycol 3350 or PEG 3350. Basically, osmotic agents, such as polyethylene glycol found in these drugs, work naturally with the water in the colon to unblock a person’s system. Soluble, non-absorbable PEG 3350 hydrates, softens and eases stools by gently attracting water in the colon through a process known as osmosis. The water increases stool volume and stretches the wall of the bowel, triggering the defecation reflex so the digestive system can be unblocked naturally.

Does MiraLAX work faster than ClearLax?

Despite anecdotal claims on many platforms, MiraLAX and ClearLax work in a similar fashion. MiraLAX and ClearLax should start working within one to four days after commencement of treatment. Osmotic laxatives like MiraLAX and ClearLax contain substances that are poorly absorbable and draw water into the lumen of the bowel. Polyethylene glycol functions as an osmotic laxative that causes increased water retention in the lumen of the colon by binding to water molecules, thereby producing loose stools. Because it works naturally with the water in your body without causing harsh side effects, you do not need to worry about sudden urgency.

How should I take ClearLax and Miralax?

Follow all directions on your prescription label. Do not use ClearLax or Miralax in larger or smaller amounts or for longer than recommended.

To use the powder form of this medicine, measure your dose with the medicine cap on the bottle. This cap should contain dose marks on the inside of it. Pour the powder into 4 to 8 ounces of a cold or hot beverage such as water, juice, soda, coffee, or tea. Stir this mixture and drink it right away. Do not save for later use.

ClearLax or Miralax should produce a bowel movement within 1 to 3 days of using the medication. Polyethylene glycol 3350 normally causes loose or even watery stools.

Do not use ClearLax or Miralax more than once per day. Call your doctor if you are still constipated or irregular after using this medication for 7 days in a row.

Store at room temperature away from moisture and heat.

ClearLax vs Miralax: which produces more side effects?

Since they contain the same active ingredients, ClearLax and Miralax will produce similar side effects. Get emergency medical help if you have signs of an allergic reaction including:

Stop taking ClearLax or Miralax and call your doctor at once if you have: 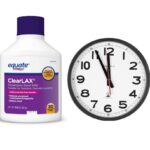 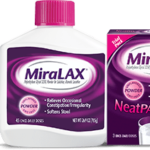 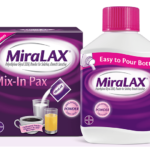 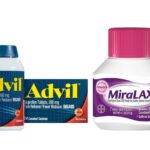 Can You Take Ibuprofen With MiraLAX?
<
Tags
ClearLax vs Miralax