Active pharmaceutical ingredients are the ingredients in a drug that is biologically active. According to the FDA, active ingredients also include those components of the product that may undergo chemical change during the manufacture of the drug product and be present in the drug product in a modified form intended to furnish the specified activity or effect.

You need to know the names of your prescriptions, and understand the important details about how they work. For example, some medicines may interact badly with certain foods, other medications, or even food supplements, and can make you very ill.

The active pharmaceutical ingredient in Advil is ibuprofen. This active ingredient belongs to a class of drugs called nonsteroidal anti-inflammatory drugs (NSAIDs). Ibuprofen was discovered in 1961 by Stewart Adams and John Nicholson while working at Boots UK Limited and initially marketed as Brufen. It is available under a number of trade names, including Nurofen, Advil and Motrin. It was first marketed in 1969 in the United Kingdom and in 1974 in the United States.

What side effects can the active ingredient in Advil cause?

Ibuprofen may cause side effects. Tell your doctor if any of these symptoms are severe or do not go away:

Some side effects can be serious. If you experience any of the following symptoms, call your doctor immediately. Do not take any more ibuprofen until you speak to your doctor.

Ibuprofen may cause other side effects. Call your doctor if you have any unusual problems while taking this medication.

People who take nonsteroidal anti-inflammatory drugs (NSAIDs) (other than aspirin) such as Advil may have a higher risk of developing a heart attack or a stroke than people who do not take these medications. These events may happen without warning and may cause death. This risk may be higher for people who take NSAIDs for a long time. Do not take an NSAID such as ibuprofen if you have recently had a heart attack, unless directed to do so by your doctor. Tell your doctor if you or anyone in your family has or has ever had heart disease, a heart attack, or a stroke; if you smoke; and if you have or have ever had high cholesterol, high blood pressure, or diabetes. Get emergency medical help right away if you experience any of the following symptoms: chest pain, shortness of breath, weakness in one part or side of the body, or slurred speech.

If you will be undergoing a coronary artery bypass graft (CABG; a type of heart surgery), you should not take ibuprofen right before or right after the surgery.

NSAIDs such as Advil may cause ulcers, bleeding, or holes in the stomach or intestine. These problems may develop at any time during treatment, may happen without warning symptoms, and may cause death. The risk may be higher for people who take NSAIDs for a long time, are older in age, have poor health, or who drink three or more alcoholic drinks per day while taking ibuprofen. Tell your doctor if you take any of the following medications: anticoagulants (‘blood thinners’) such as warfarin (Coumadin, Jantoven); aspirin; other NSAIDs such as ketoprofen and naproxen (Aleve, Naprosyn); oral steroids such as dexamethasone, methylprednisolone (Medrol), and prednisone (Rayos); selective serotonin reuptake inhibitors (SSRIs) such as citalopram (Celexa), fluoxetine (Prozac, Sarafem, Selfemra, in Symbyax), fluvoxamine (Luvox), paroxetine (Brisdelle, Paxil, Pexeva), and sertraline (Zoloft); or serotonin norepinephrine reuptake inhibitors (SNRIs) such as desvenlafaxine (Khedezla, Pristiq), duloxetine (Cymbalta), and venlafaxine (Effexor XR). Also tell your doctor if you have or have ever had ulcers, bleeding in your stomach or intestines, or other bleeding disorders. If you experience any of the following symptoms, stop taking ibuprofen and call your doctor: stomach pain, heartburn, vomit that is bloody or looks like coffee grounds, blood in the stool, or black and tarry stools.

Keep all appointments with your doctor and the laboratory. Your doctor will monitor your symptoms carefully and will probably order certain tests to check your body’s response to ibuprofen. Be sure to tell your doctor how you are feeling so that your doctor can prescribe the right amount of medication to treat your condition with the lowest risk of serious side effects. For More Information: Read: Is Ibuprofen (Advil Motrin) Safe During Breastfeeding? 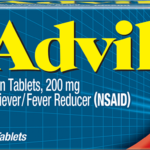 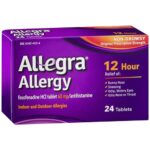 What is the Active Ingredient in Allegra? 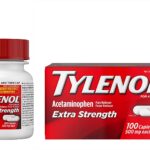 What Happens When You Take Vicodin With Alcohol?