Depression is a mental health issue that starts most often in early adulthood. It’s also more common in women. However, anyone at any age may deal with depression.

Depression affects your brain, so drugs that work in your brain may prove beneficial. Common antidepressants may help ease your symptoms, but there are many other options as well.

Each drug used to treat depression works by balancing certain chemicals in your brain called neurotransmitters. These drugs work in slightly different ways to ease your depression symptoms.

Many common drugs for depression fall into the following drug classes:

Atypical antidepressants, which don’t fall into these drug classes, and natural supplements, such as St. John’s wort, are also available.

What is hair loss?

According to the NIH, alopecia areata is a disease that happens when the immune system attacks hair follicles and causes hair loss. Hair follicles are the structures in the skin that form hair. While hair can be lost from any part of the body, alopecia areata usually affects the head and face. Hair typically falls out in small, round patches about the size of a quarter, but in some cases, hair loss is more extensive. Most people with the disease are healthy and have no other symptoms.

The course of alopecia areata varies from person to person. Some have bouts of hair loss throughout their lives, while others only have one episode. Recovery is unpredictable too, with hair regrowing fully in some people but not in others.

There is no cure for alopecia areata, but there are treatments that help hair grow back more quickly. There are also resources to help people cope with hair loss.

Who Gets Alopecia Areata?

Anyone can have alopecia areata. Men and women get it equally, and it affects all racial and ethnic groups. The onset can be at any age, but most people get it in their teens, twenties, or thirties. When it occurs in children younger than age 10, it tends to be more extensive and progressive.

If you have a close family member with the disease, you may have a higher risk of getting it, but for many people, there is no family history. Scientists have linked a number of genes to the disease, which suggests that genetics play a role in alopecia areata. Many of the genes they have found are important for the functioning of the immune system.

People with certain autoimmune diseases, such as psoriasis, thyroid disease, or vitiligo, are more likely to get alopecia areata, as are those with allergic conditions such as hay fever.

It is possible that emotional stress or an illness can bring on alopecia areata in people who are at risk, but in most cases, there is no obvious trigger. Hair loss can be a side effect of certain drugs, such as those used for cancer, arthritis, depression, heart problems, gout, and high blood pressure.

There are three main types of alopecia areata:

•          Patchy alopecia areata. In this type, which is the most common, hair loss happens in one or more coin-sized patches on the scalp or other parts of the body.

•          Alopecia totalis. People with this type lose all or nearly all of the hair on their scalp.

•          Alopecia universalis. In this type, which is rare, there is a complete or nearly complete loss of hair on the scalp, face, and rest of the body.

How medications cause hair loss

Drugs cause hair loss by interfering with the normal cycle of scalp hair growth.  Medications and supplements for depression can cause two types of hair loss: anagen effluvium and telogen effluvium. Anagen effluvium is the loss of actively growing hair during the growth stage of the hair cycle. It affects not only the hair on your head but can also impact eyebrows, eyelashes, and body hair as well.

Telogen effluvium occurs when hair follicles are in the resting phase, causing hair to fall out early. Telogen effluvium is more common than anagen effluvium and can develop as a possible side effect of many widely used medications and supplements. While many antidepressants are labeled with hair loss as a potential side effect, with the exception of chemotherapy treatment, it’s quite rare with most of those medications

Several antidepressants can cause hair loss, they include: 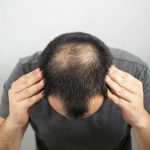 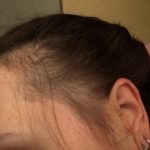 Does Telmisartan (Micardis) Cause Hair Loss? 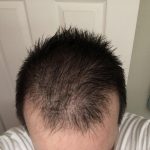 Does Spironolactone Cause Hair Loss? 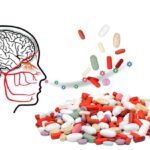 Does Telmisartan (Micardis) Cause Hair Loss?

Can Xanax Lower Your Blood Pressure?