The pink round Pill with the imprint OP 20 has been identified as Oxycodone Hydrochloride Extended-Release 20 mg supplied by Teva Pharmaceuticals USA, Inc.. Oxycodone is used in the treatment of chronic pain; pain and belongs to the drug class narcotic analgesics.

OP 20 pill is a powerful painkiller and one of the most commonly abused prescription drugs in the country. Many people who abuse OP 20 pill start out taking a prescribed amount but as their body develops a tolerance to the drug, they need a higher dose to maintain the same relief or high.

The transition from use to abuse to addiction can be a quick and dangerous road. OP 20 pill is a powerful drug and offers much-needed relief to many people struggling with painful or terminal conditions; as such, it can be hard to stay in control.

The abuse of OP 20 pill has created a sea of drug users looking for the pills. Unfortunately, criminal elements have taken advantage of these by producing counterfeit pills to fuel an epidemic that has already consumed many.

Counterfeit pills purchased online or through social media websites pose a serious public health and safety hazard.  These pills may contain the wrong ingredients, contain too little, too much, or no active ingredient at all, or contain other, potentially life-threatening hidden ingredients, such as fentanyl or methamphetamine.  DEA urged the public to obtain prescription drugs only from state-licensed pharmacies that are located in the United States, where the U.S. Food and Drug Administration and state authorities can assure the quality of drug manufacturing, packaging, distribution, and labeling. “Counterfeit pills are extremely dangerous, as they often contain toxic or illicit ingredients such as fentanyl, increasing the likelihood of an overdose.

How to Spot Fake OP 20 pill

As a consumer, you may not have access to most of the test equipment used by regulatory bodies to verify the identity of a drug product. The following tips will serve as a guide to purchasing genuine OP 20 pills and help you avoid fakes;

The source of the drug also determines if you are buying a fake OP 20 pill or not. Buying Mexican OP 20 pill exposes you to a lot of risk. Filling your prescription in a reputable pharmacy greatly reduces your chances of buying fake drugs while buying from illiterate and unqualified vendors who hawk drugs in buses, motor parks and in the streets increases your chances of buying fake drugs.

This is another way of identifying fake OP 20 pill. If the price is far cheaper than what is expected, then you have to think twice. However, this may not always be true especially for some products (fake innovator/generic brands) which may be sold at the same price as the genuine one.

Counterfeit OP 20 pill most of the time contains substances other than the appropriate Active Pharmaceutical Ingredient (API). They may contain incorrect substances, improper dosage or hazardous substances like fentanyl which produce unusual side effects, worsening medical condition after taking it. The medication should be stopped once any of the above is noticed.

Fentanyl testing is one of the most reliable ways of telling a fake from a real OP 20 pill. A new University of Maryland study found fentanyl tops the list of drugs detected in overdose patients at two Baltimore hospital emergency departments. The finding suggests that hospitals and medical systems throughout the United States consider adding fentanyl, a potent synthetic opioid linked to most fatal overdoses in Maryland, to their routine drug testing panels. That is the conclusion of researchers at the University of Maryland School of Medicine (UMSOM) and the Center for Substance Abuse Research (CESAR) at the University of Maryland, College Park. Currently, fentanyl is not routinely included in these panels nationwide. The procedure described below can help law enforcement agents and public health officials to pick out fentanyl laced powders and pills. 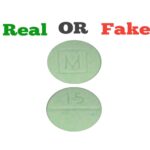 How Long Does 3 mg of Xanax Last in Your System?