Klonopin is a brand of Clonazepam, a type of benzodiazepine. It is thought that clonazepam works by enhancing the activity of certain neurotransmitters in the brain. Klonopin slows down brain activity to help users feel relaxed. It was initially formulated to help people with epilepsy manage seizures. Later, the drug’s rapid and powerful calming effects were also recognized as a way to treat panic attacks.

Klonopin is often prescribed to ease anxiety and withdrawal symptoms from alcohol and other addictive substances. Doctors may also prescribe Klonopin for short-term insomnia. The drug is swallowed as a blue tablet or taken as a quick-dissolve tablet placed on the tongue as often as three times a day. Slang terms for Klonopin include K-pins, Tranks, Downers, or Benzos.

Recently, over 9 million counterfeit sedative tablets were seized as a result of a joint operation between the Hungarian National Police (Magyar Rendőrség) and the Norwegian Police (Politi) with the support of Europol and Eurojust.

The two leaders of this criminal network were arrested in Hungary, alongside three of their accomplices, as a result of house searches carried out on 24-25 March. The criminals were producing counterfeit Clonazepam tablets in an underground laboratory. Some 250 kilos and 300 liters of various precursors were found on-the-spot. Most of these counterfeit pills end up in the United states, United Kingdom and Canada.

Counterfeit Klonopin pills often do not contain the real active ingredient (Clonazepam) but deadly ingredients like fentanyl. Some drug dealers are using fentanyl to produce fake drugs. This is because it takes very little to produce a high with fentanyl, making it a cheaper option. This is especially risky when people taking drugs don’t realize they might contain fentanyl as a cheap but dangerous additive. They might be taking stronger opioids than their bodies are used to and can be more likely to overdose. Fentanyl is a powerful synthetic opioid that is similar to morphine but is 50 to 100 times more potent.

How to Identify Fake Klonopin

According to Interpol, counterfeit medicines are often packaged to a high standard with fake pills that look identical to the genuine ones. Sometimes a laboratory test is the only way to identify the difference.

It is essential to take care when buying your medicines, especially online.

How to Spot Fake Klonopin Laced With Fentanyl

Fentanyl testing is one of the most reliable ways of telling a fake Klonopin from a real one. A new University of Maryland study found fentanyl tops the list of drugs detected in overdose patients at two Baltimore hospital emergency departments. The finding suggests that hospitals and medical systems throughout the United States consider adding fentanyl, a potent synthetic opioid linked to most fatal overdoses in Maryland, to their routine drug testing panels. That is the conclusion of researchers at the University of Maryland School of Medicine (UMSOM) and the Center for Substance Abuse Research (CESAR) at the University of Maryland, College Park. Currently, fentanyl is not routinely included in these panels nationwide. The procedure described below can help law enforcement agents and public health officials to pick out fentanyl laced powders and pills.

Many countries have unique methods for verifying the genuineness of medications using authentication code or other online portals to confirm the authenticity of a drug. You can use these methods to confirm whether the drug in your possession is genuine or fake. 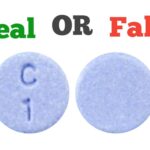 How to Spot A fake Blue C1 Pill

How to Spot a Fake 555 Pill
<
Tags
spot fake klonopin

How to Spot A fake Blue C1 Pill