Benadryl is a brand of diphenhydramine, an antihistamine used to relieve symptoms of allergy, hay fever, and the common cold. These symptoms include rash, itching, watery eyes, itchy eyes, nose, throat, cough, runny nose, and sneezing. It is also used to prevent and treat nausea, vomiting, and dizziness caused by motion sickness.

Benadryl can also be used to help you relax and fall asleep. This medication works by blocking a certain natural substance (histamine) that your body makes during an allergic reaction. Its drying effects on such symptoms as watery eyes and runny nose are caused by blocking another natural substance made by your body (acetylcholine). Cough-and-cold products have not been shown to be safe or effective in children younger than 6 years.

How is Benadryl used?

Take Benadryl exactly as directed on the label, or as prescribed by your doctor. Do not use in larger or smaller amounts or for longer than recommended. Cold or allergy medicine is usually taken only for a short time until your symptoms clear up.

Do not give this medication to a child younger than 2 years old. Always ask a doctor before giving a cough or cold medicine to a child. Death can occur from the misuse of cough and cold medicines in very young children.

You should not use Benadryl to make a child sleepy.

Measure liquid medicine with the dosing syringe provided, or with a special dose-measuring spoon or medicine cup. If you do not have a dose-measuring device, ask your pharmacist for one.

As a sleep aid, take Benadryl within 30 minutes before bedtime. Call your doctor if your symptoms do not improve after 7 days of treatment, or if you have a fever with a headache, cough, or skin rash.

Yes, you can get high off Benadryl. Although technically speaking you wouldn’t feel much of a “high” but rather an extremely unpleasant hallucinogenic phase comparable to that of a lucid nightmare. Anything over 600mg of Benadryl is capable of inducing incredibly potent auditory, visual, and physical hallucinations which could range from anywhere to 6-8 hours depending on dosage. These effects include but are not limited to:

Benadryl high was made popular by the Benadryl challenge on Tik Tok which encourages users to take upwards of 12 tablets at a time, while the directions say children age 6 to 12 should take one tablet every 4 to 6 hours, and adults should take no more than 2 tablets every 4 to 6 hours. The instructions also say not to take the medicine more than six times in 24 hours.

The most common side effect of Benadryl, when taken correctly, is drowsiness. But when taken in excessive amounts, risks can include:

But the most dangerous outcome? Death.

Large doses of Benadryl can cause high heart rates, which can trigger an arrhythmia, stroke, seizure, or cardiac arrest. All of these conditions could result in permanent brain damage or induce a coma. An overdose can harm everyone differently.

Can You Get High On Dramamine? 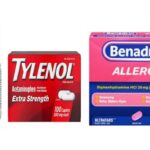 Can You Take Tylenol and Benadryl Together? 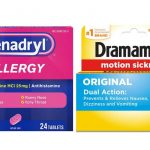 Is Benadryl And Dramamine The Same Thing?

What is the Active Ingredient in Benadryl?
<
Tags
Can You Get High Off Benadryl